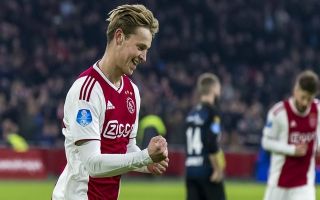 Barcelona have laid the groundwork for their future today by confirming the signing of talented young Ajax midfielder Frenkie De Jong. The ace will arrive in the summer.

According to Barcelona’s official website, the starlet will cost an initial €75m and the deal includes potential add ons worth a further €11m. De Jong joins the defending La Liga champions on a five-year deal.

The youngster will become one of the highest paid central-midfielders in world football once he joins Barcelona, according to The Express, De Jong will earn a basic salary of €10m per season.

The midfielder has the chance to earn an additional €6m, these bonuses will be based on the silverware that the Blaugrana win and the appearance that the Dutchman makes.

Here’s how De Jong’s wage will compare to some of the best midfielders in the world:

Barcelona really splashed out on this one! ? pic.twitter.com/y4C5voio87

Wow… With a wage like that there will be a serious expectation for the Dutchman to arrive in Barcelona and hit the ground running straight away.

Here’s how Barcelona announced the signing of the Dutch sensation:

What you've all been waiting for… pic.twitter.com/gDE1mujMLF

The Blaugrana have continued their rich tradition of signing some of the brightest Dutch talents, 21-year-old De Jong follows in the footsteps of the great Johan Cruyff as well as joining a list of Dutch football icons including the likes of Patrick Kluivert, Ronaldo Koeman and Frank De Boer.

Once the youngster arrives in the summer he will join his compatriot Jasper Cillessen, who is the Netherlands No.1 and is also a former Ajax star.