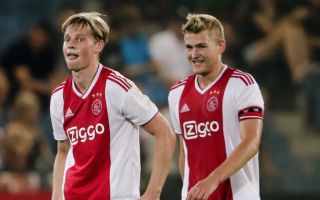 Barcelona have reportedly won the race to seal the transfer of Ajax midfielder Frenkie de Jong ahead of the likes of Paris Saint-Germain and Manchester City.

The Netherlands international is widely considered to be one of the most exciting young talents in the world at the moment, with a host of clubs unsurprisingly seeming keen on him.

Just yesterday the Metro were tipping De Jong to move to PSG over City, but Dutch outlet De Telegraaf now claim he’s looking set for a big move to Barcelona for as much as €90million.

The 21-year-old seems an ideal fit for Barca’s midfield and could be a top class performer for them for years to come.

Man City and PSG, however, will no doubt be disappointed to miss out on him, with Pep Guardiola’s side in particular perhaps in need of that kind of young player coming in as a long-term replacement for the ageing Fernandinho.