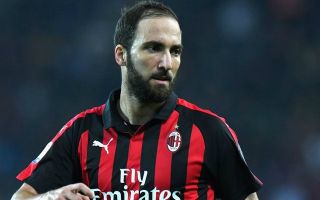 Gonzalo Higuain should be having his medicals with Chelsea right about now if a recent tweet by Fabrizio Romano is anything to go by.

The trustworthy Italian journalist claims Higuain has now landed in London and a deal can soon be made official after he completes the final stage of the transfer process.

MORE: Chelsea take key step to ensure Higuain transfer goes through in time for him to play vs Tottenham

Additional information from Angelo Mangiante states that the Argentina international should have his first training session with the Blues this afternoon.

#Higuain just landed at the airport in London (Farnborough).
After medicals, he will practise in the afternoon at Cobham. First training today with #Sarri at #Chelsea. @SkySport #CFC #Transfers

All in all, this looks an exciting signing for Chelsea, who have long looked in need of a big-name signing up front after the struggles of Alvaro Morata and Olivier Giroud.

Eden Hazard has ended up playing a lot of games up front this season, but the Belgian has not convinced in that position either, as he’s made a career for himself as a winger or attacking midfielder.

Higuain has been prolific in his time in Italy despite struggling on loan at AC Milan from Juventus this season, and if he can show the kind of form he showed under Maurizio Sarri in their time together at Napoli, he’ll surely be a big hit at Stamford Bridge.