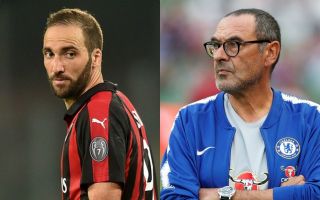 Gonzalo Higuain has received something of a hammering in the Italian press as the striker nears a loan transfer from Juventus to Chelsea.

The Argentina international has endured a difficult season on loan at AC Milan, and is now looking increasingly close to becoming a Blues player today, according to the below tweet from Fabrizio Romano and other widespread reports.

It seems, however, that Higuain’s time at Milan and his move away this January has left something of a sour taste, with Calciomercato quoting Italian paper La Repubblica aiming a huge parting dig at the 31-year-old.

Higuain’s mental strength has come under scrutiny after failing to live up to expectations at Milan, with La Repubblica accusing him of failing to be a leader and looking for ‘shelter’ under his old manager Maurizio Sarri at Stamford Bridge.

‘The inability to be a leader: Higuain and the shelter from Sarri,’ the piece read.

Gonzalo Higuain shone at Juventus but flopped at AC Milan

‘Pipita strongly wanted to go back to work with the coach with whom he scored 36 goals in a single season at Napoli. Instead, he ended his disappointing adventure at Milan, where he proved his inability to be a true leader.’

Given Alvaro Morata’s biggest problem at Chelsea seemed to be his weak mentality, CFC fans may not be too pleased to hear their replacement isn’t the toughest either, though it remains to be seen if he can revive his career in England with a reunion with Sarri.