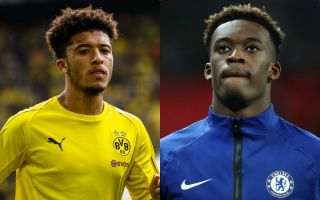 Liverpool fans seem pleased with the idea of their club sealing a shock transfer swoop for Chelsea wonderkid Callum Hudson-Odoi.

The 18-year-old looks a hugely promising talent coming through right now, and Bild have somewhat surprisingly linked him with a potential move to stay in England despite long-standing interest from Bayern Munich.

Hudson-Odoi may well feel he’d get more playing time at Anfield, with Jurgen Klopp showing he’s quite willing to promote youth if they’re good enough. That said, Liverpool already have quality in attack like Mohamed Salah and Sadio Mane, who would no doubt continue to block the youngster’s hopes of playing regular first-team football.

English youngsters like Trent Alexander-Arnold and Joe Gomez have recently made it big at Liverpool, and fans seem to think Hudson-Odoi would be another fine addition.

It remains to be seen how realistic this potential move is, given the rivalry between these two clubs, but here’s an idea of how a number of LFC supporters on Twitter are taking this news at the moment…

Liverpool is linked with Callum Hudson-Odoi. If it’s actually true, i think we will get him. And i would love him at Liverpool. Klopp would make him into a world-class player.

Would love Hudson-Odoi at #LFC

You gotta Love what football can do to you. You’re just about to go to bed and then u hear liverpool linked with Hudson-Odoi. Will we sign him ? Probably not but even being linked is buzzing

Hudson-Odoi linked to Liverpool? I love the idea, but that’s never happening.

According to Sportbuild, LFC have joined the race to sign Callum Hudson-Odoi

English players with hyphenated last names seem to work at LFC so sign him up! pic.twitter.com/i3KCYynDUK

I’d take CHO at Liverpool. Guaranteed starter for most of the games