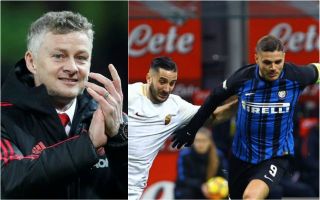 Manchester United have been handed a huge boost in the transfer pursuit of Mauro Icardi, who is set to reject a new contract at Inter Milan.

According to Don Balon, the Argentina international is not keen on the club’s proposal of a big new release clause as it could do too much to tie him down to the Italian giants.

United are one of the clubs to be strongly linked with Icardi in recent times, and it now looks as though he’s effectively inviting bids to meet his current release clause of £96million.

Had he signed a new deal, Icardi’s clause would go up to close to £175m – so one imagines clubs will now be eager to pounce on this situation.

Chelsea and Real Madrid have also been linked with the 25-year-old in recent times, though the Blues may now be out of the running as they’re set to sign Gonzalo Higuain instead.

Icardi could be a useful addition at United, who could do with an upgrade on the inconsistent Romelu Lukaku.