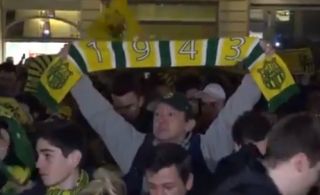 Nantes fans gathered together last night to pay tribute to their former striker Emiliano Sala after the disappearance of his plane as he prepared for a transfer to Cardiff City.

This sad news has shocked the footballing world, with Sala only days ago bidding farewell to his team-mates at Nantes and looking set for a career in the Premier League.

However, many are now expecting the worst as the plane he was travelling in vanished yesterday, leading to emotional tributes from all over the footballing world.

This will no doubt be hitting Nantes fans hardest, however, as this touching video below from Goal shows: