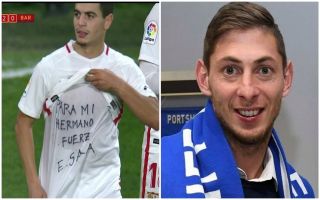 Sevilla striker Wissam Ben Yedder revealed a message of ‘strength’ to his ‘brother’ Emiliano Sala, who was on board the flight that went missing over the Channel Islands.

In the 76th minute of this evening’s Copa Del Rey quarter-final clash between Sevilla and Barcelona, the Frenchman scored to make it 2-0 to Sevilla en route to their shock first leg win over the defending Copa Del Rey defending champions.

Ben Yedder celebrated by revealing a message for Sala, it’s understood that the message translates to:

“For my brother. Strength. E.Sala.”

Ben Yedder revealed a message underneath his shirt after he scored Sevilla’s second of the night:

Ben Yedder and Sala haven’t played together but the pair share the same agent:

As the search for the missing flight continues our thoughts and prayers are with the families of those affected.