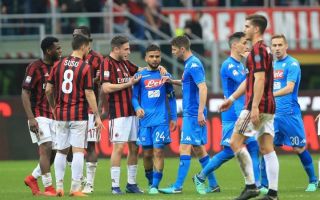 AC Milan goalkeeper Pepe Reina has all but confirmed Gonzalo Higuain is leaving the club for a transfer to Chelsea.

Calciomercato and numerous other sources have strongly linked the Argentina international with a move to Stamford Bridge this January, and Reina’s quotes on the player now suggest this deal is now very much on the cards.

The Spaniard was asked about Higuain and admitted he was losing a team-mate, though he insisted they will remain friends.

‘Higuain? Football also hands us bitter moments, I lose a teammate, but he will always be a friend of mine,’ Reina is quoted by Calciomercato.

It seems only a matter of time now before the 31-year-old is officially announced as a new Chelsea player, which will be great news for the west London club.

Gonzalo Higuain is set to join Chelsea from AC Milan

With the likes of Alvaro Morata and Olivier Giroud badly struggling this season, it is little surprise Maurizio Sarri would have been keen on an upgrade to his strike-force.

Higuain has been prolific down the years in Serie A, even if his loan spell at Milan hasn’t been the most convincing.