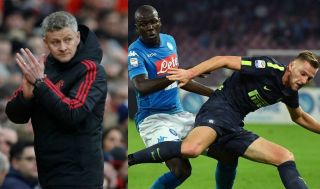 Inter defender Milan Skriniar has seemingly ended any Man Utd hopes of a transfer amid ongoing speculation linking him with a move to Old Trafford.

As noted by The Sun, he continues to be linked with a switch to United this month despite talk of a contract renewal offer, while it’s added that the Red Devils are said to have had a £53m offer rebuffed last year.

If that wasn’t enough of an indication that the Nerazzurri have no desire to sell, the latest blow has come from the Slovakian international himself, as he has ruled out an exit from the San Siro.

“I have decided, for me there is only Inter, I remain with the Nerazzurri. We will win trophies, I’m sure,” he is quoted as saying by Calciomercato, via the paper edition of Tuttosport.

That should now end all talk of an exit, with the Italian giants now focused on securing another top-four finish in Serie A this season to secure a return to the Champions League.

Skriniar has been an important part in that improvement under Luciano Spalletti, making 40 appearances last season while being an almost ever-present this year too.

In contrast, it will be a blow for United as although they have improved defensively under interim boss Ole Gunnar Solskjaer, they still have the unwanted record of having the worst defence out of the top seven sides in the Premier League, having conceded 33 goals in 23 league games.

Solskjaer has seemingly found a solution as they’ve only conceded four goals in the seven games that he’s been in charge of, but ultimately, they could still be looking for long-term solutions in defence if their next manager isn’t content with their current options.

For now though, it seems as though Skriniar will be going nowhere as he plots a successful future at the heart of the Inter defence.