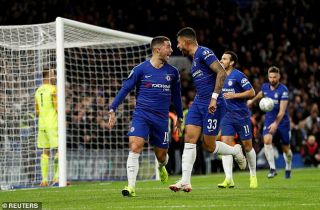 Chelsea fans are eager for Maurizio Sarri to keep playing Emerson Palmieri at left-back instead of Marcos Alonso after Thursday night’s win over Tottenham.

The Blues survived a second-half scare to go through to the Carabao Cup final after beating Spurs in a penalty shoot-out at Stamford Bridge.

While it wasn’t exactly a vintage display from Chelsea, they were good value for their win despite Sarri making a couple of changes to his XI.

Olivier Giroud started up front, allowing Eden Hazard to move back into a more familiar wide role, and Emerson got the nod over Alonso on the left-hand side of defence.

The Brazilian-born Italy international hasn’t seen a huge amount of playing time since moving to Stamford Bridge last January, but he really caught the eye tonight and these CFC fans want him to keep getting into the team ahead of Alonso.

The Spaniard doesn’t seem the most popular Chelsea player after an indifferent campaign, so will Sarri take this advice and give Emerson more games now?

If Emerson isn’t first choice LB from now on, we’re showing up at Sarri’s house

I just hope Emerson was able to convince and not confuse Sarri that he's better suited for the LB role.

That Emerson cross to Giroud was beautiful man. Even Sarri got to his knees when he saw how Giroud missed that one.
Emerson over Alonso every day #JusticeForEmerson

FULL-TIME
– Hazard back to his best at LW
– Higuain is needed to finish those chances
– Kante masterclass.
– CHO deserved game time.
– Emerson > Alonslow
– Barkley needs to be more creative. He was decent today tho.
– #MyKepa plays for the club
– Sarri asked for this, he got ?

If Sarri ever starts Alonso ahead of Emerson, then he has a problem. Unforgiveable.

Emerson showing Sarri what he can do! Has sealed the starting spot for me.

If only Sarri would start starting Emerson from now on. One can only hope.

Emerson is class above Alonso.