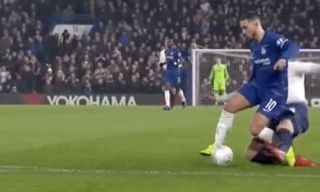 Chelsea fans seem pretty convinced this incident below should have been a penalty as Toby Alderweireld went in hard on Eden Hazard.

Luckily, the Blues are already 2-0 up at half time against Tottenham, and now lead 2-1 on aggregate after losing that first leg at Wembley.

Still, after a dominant first half they could have been really out of sight by now if this had been given as a penalty, and to be fair it looks a pretty harsh decision not to award it.

Here’s a clip of the challenge from Alderweireld on his fellow Belgian, and some reaction from furious CFC supporters…

lmaoooo you're telling me they checked this on VAR as well and STILL found it not worthy of a foul? disgraceful, but expected. pic.twitter.com/gRRIcJLHXG

How was that tackle on Hazard not a penalty???? #CHETOT

How can VAR give the kane penalty and not the hazard one. Hazard one is 100 times more a pen

VAR and they still can’t give this? Stonewall! ? https://t.co/8m0LGcub2l

Incredibly incompetent performance from Atkinson. Allowing Spurs to foul, at will, without stopping it with any yellows. And allowing Alderweireld to take down Hazard from behind, which by definition is a foul & penalty.

Stonewall penalty on Hazard not given in the last minute of the first half. Chelsea looks much better today (even though it's Spurs B team).