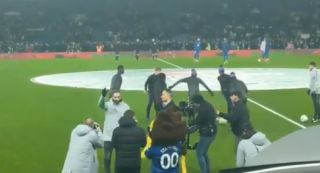 Gonzalo Higuain was introduced to the Chelsea home fans for the first time this evening ahead of the Carabao Cup match against Tottenham.

The Argentina international has just joined the Blues on loan from Juventus, but did not manage to join in time to make his debut this evening.

Still, Higuain was able to attend the game at Stamford Bridge and got on the pitch beforehand to say a first hello to his new supporters.

The 31-year-old did suggest they would be seeing him on the pitch soon, however, saying ‘see you Sunday’ at the end of his short introduction.

Here’s the video of Higuain speaking to Chelsea fans from the Metro’s Sean Kearns:

Gonzalo Higuain presented to the Stamford Bridge crowd after joining from Juventus pic.twitter.com/tz6R2BN26w

New signing Gonzalo Higuain is introduced to the @ChelseaFC fans at Stamford Bridge this evening pic.twitter.com/oIcK7HnS3L