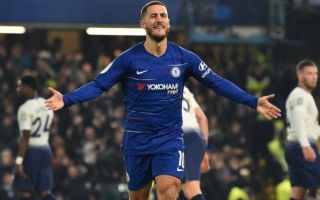 Chelsea star Eden Hazard has now scored in 46 games at Stamford Bridge – and lost none of them.

The Belgium international was on the score sheet against Tottenham on Thursday night, helping the Blues to a 2-1 win and eventual victory on penalties against their London rivals.

MORE: (Photos) Gonzalo Higuain shows he’s already a true Blue with celebrations at the end of Chelsea vs Tottenham

Although Hazard’s goal was not enough to settle the tie as Fernando Llorente netted in the second half to make it 2-2 on aggregate and force penalties, it still counts in extending this remarkable personal record.

According to Opta Joe, the 28-year-old has now scored 46 home goals for the club in all competitions, with zero defeats.

46 – Chelsea have lost none of the 46 games (all comps) in which Eden Hazard has scored in at Stamford Bridge (P46 W39 D7 L0). Charm. pic.twitter.com/gjjAAvIVED

Maurizio Sarri got some stick for using Hazard as a false nine recently, and it certainly seems a better idea using him out wide.

If the Italian tactician can get his star player scoring more, especially at home, it should seemingly lead to even more wins!