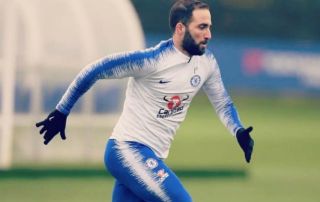 The Argentina international can be seen in Chelsea colours in the pictures below from his Twitter account as he starts life in west London.

Higuain looks in good shape in training with CFC, despite sometimes being mocked for looking a bit overweight in the past.

Either way, the 31-year-old has long been one of Europe’s most deadly finishers and should be a major upgrade on Alvaro Morata up front in Maurizio Sarri’s side.