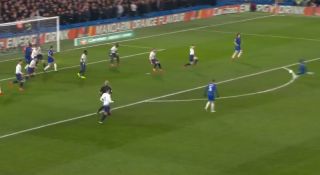 Chelsea midfielder N’Golo Kante scored with a rasping shot that went through the legs of three Tottenham players on its way in.

The France international has made it 1-0 to the Blues in tonight’s Carabao Cup semi-final second leg at Stamford Bridge, making it 1-1 on aggregate.

Harry Kane’s goal settled the first meeting between these two, but Chelsea are back in the tie now thanks to Kante’s powerful strike.

While the Tottenham defence doesn’t exactly cover itself in glory here, this is a strong finish from a player who’s not exactly renowned for being much of a goal-scorer…