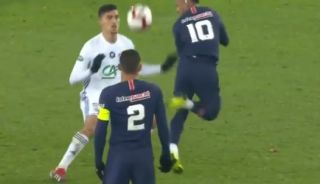 Neymar got his own back on Strasbourg’s Moataz Zemzemi and his repeated kicks on him with a stunning piece of skill.

Watch the video below as the Paris Saint-Germain forward is provoked into some sublime skill after being angered by his opponent in this French Cup clash.

Neymar is one of the most naturally gifted footballers on the planet, and is hugely entertaining to watch when he’s at his best.

This rainbow flick has to be up there with one of his finest moments of individual skill on the pitch, though there are a lot to choose from!

Neymar destroys Moataz Zemzemi with a rainbow flick after being kicked by him three times in a row. pic.twitter.com/qIg0DAC6w1