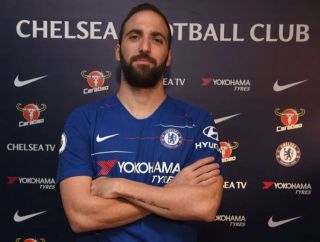 New Chelsea signing Gonzalo Higuain has spoken about completing his move to Stamford Bridge, and is eager to reunite with former boss Maurizio Sarri.

The Blues have struggled for goals so far this season, scoring 40 in their 23 Premier League games which is the lowest tally of the top six sides.

SEE MORE: Eden Hazard prepared to sign new five-year contract with Chelsea as long as Real Madrid don’t do this

With neither Alvaro Morata nor Olivier Giroud able to offer a consistent source of goals, they’ve acted in the January transfer window to bring in Higuain on a loan deal, and Sarri will hope that his former Napoli star can fire them towards their objectives this season.

The 31-year-old is undoubtedly excited about the prospect of the new challenge that awaits him, while he also spoke about working with Sarri again and the chance to play in the Premier League.

“It was an opportunity that when it presented itself I couldn’t miss out on. I’m really excited to be here, to be working with Maurizio Sarri again and to be at a club with so much history,” he is quoted as saying on the club’s official site.

“Chelsea is a team who always has great players and as kids everybody watched the Premier League, so it’s a real dream for me to come and play in this league.

“Always in football you have those targets to win great trophies so I hope that’s going to be the case here. I feel very excited, with great hope and desire to achieve success with Chelsea.”

Higuain enjoyed the most prolific campaign of his career under Sarri, scoring 38 goals in 42 games in the 2015/16 season. While he’s a little older now and had a tough time during his six-month loan spell with AC Milan to start this year, Chelsea will be hoping that the old magic is still there as he could be a fundamental addition in their hopes of securing a top-four finish and trophies this season.

Based on his comments above though, Higuain is certainly motivated and has the desire to make his latest move work with the pressure on Sarri to now get the best out of him and help his team reach their goals.