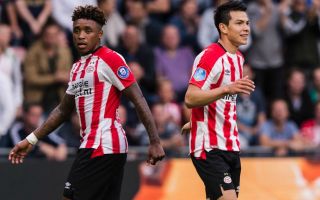 The 21-year-old has impressed so far this season, scoring 10 goals and providing nine assists in 25 appearances in all competitions.

In turn, it’s no surprise that he has attracted interest from around Europe, as having also earned his first caps with the Netherlands, he appears to have a bright future for club and country ahead of him.

However, according to Calciomercato, he could soon be on the move as it’s noted Inter, Man Utd, Liverpool and Bayern Munich are all keen on him, although it’s added that PSV value their prized asset at around €30m.

That’s a lot of money for a young player who has to prove himself consistently at the highest level, and so it remains to be seen whether or not that price-tag puts any of the clubs mentioned above off from making a move.

Nevertheless, Bergwijn has certainly proven his talent at this early stage of his career, and so it could be enough to convince one of the interested parties to take the leap of faith and invest in him.

However, question marks could perhaps be raised over whether or not either United or Liverpool even need him, given the former have the likes of Anthony Martial, Marcus Rashford, Alexis Sanchez, Juan Mata and Jesse Lingard battling for places in the final third already.

As for the Merseyside giants, Jurgen Klopp’s attacking trident of Mohamed Salah, Roberto Firmino and Sadio Mane continues to be crucial, and so he’ll be wary of unnecessarily adding more competition to his squad at the risk of upsetting the balance he’s built with the Premier League leaders.

With that in mind, time will tell if that gives the advantage to either Inter or Bayern, but Bergwijn certainly looks capable of improving any of the sides he’s being linked with.