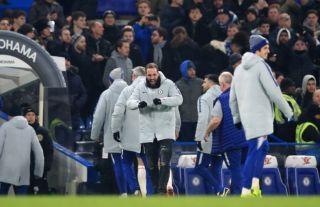 Gonzalo Higuain watched on from the sidelines as Chelsea booked their spot in the League Cup final, but he looked absolutely delighted after the game.

The Blues secured a 2-1 win over Tottenham in normal time, leaving the tie level at 2-2. The hosts went on to hold their nerve at Stamford Bridge, emerging victorious from the penalty shoot-out to set up a date with Manchester City at Wembley next month.

SEE MORE: Video: Higuain will think he could’ve had a hat-trick for Chelsea as Giroud missed series of sitters vs Tottenham

Having joined too late to make his debut in midweek, Higuain was forced to watch from a distance on Thursday night, but he’s clearly settling well and making himself at home, as seen in the image below of him celebrating alongside Maurizio Sarri.

The pair enjoyed a very productive spell together at Napoli previously, with the 31-year-old scoring 38 goals in 42 games in the 2015/16 season, the most prolific campaign of his career to date.

With that in mind, Chelsea fans will be hoping that they can work together to help him rediscover that level and form, having struggled through the opening months of this season during his loan spell with AC Milan.

Sarri’s system will undoubtedly suit the Argentine, and based on the image below, he has all the commitment needed as he appears to be relishing the opportunity to play for Chelsea as he was pictured celebrating alongside his more muted boss after the game.

#Sarri and His son #Higuain. One love pic.twitter.com/GX6iaesBqc