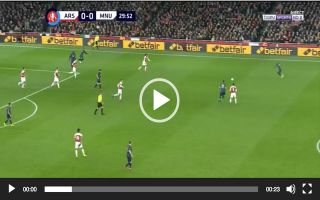 Manchester United opened the scoring in style against Arsenal in the 30th minute of tonight’s FA Cup clash, who else but Alexis Sanchez to get a goal against his former club.

Romelu Lukaku – the man who has found himself out of favour with the United faithful this season, was instrumental in the buildup to the goal. The target man duped Arsenal’s defence with a fake shot before slipping in Alexis Sanchez.

Former Gunner Sanchez took his chance extremely well, he rounded his former teammate Petr Cech before chipping the ball into the back of the net from an extremely tight angle.

Check out Sanchez’s goal below:

Sanchez has been far from impressive for United since leaving the Gunners, but did Arsenal make the wrong choice in awarding Mesut Ozil a bumper contract rather than the Chilean.