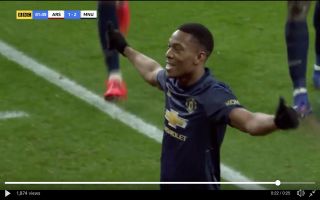 Anthony Martial has all but sealed victory for Manchester United against Arsenal in this evening’s FA Cup clash by scoring United’s third of the night.

In the 82nd minute of the tie, Paul Pogba led a counter attack for United. The World Cup winner charged forward before directing a shot at goal which was parried away by Petr Cech.

Fortunately, Anthony Martial was on hand to smash the rebound into the back of the net.

United have simply been too clinical this evening, whereas the Gunners have failed to take their chances in this game.

The Red Devils looks set to advance into the Fifth Round of the FA Cup, could Ole Gunnar Solskjaer turn United’s season around by winning a piece of silverware?