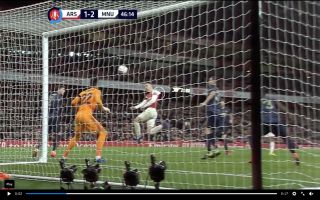 Manchester United second-choice goalkeeper Sergio Romero shows that he has the ability to produce the same kind of magic as No.1 David De Gea with this save.

Less than two minutes into the second half Romero was called into action when Aaron Ramsey headed goalwards from close range following an Arsenal cross. Romero showed off his insane reflexes by tipping the ball onto the top of the crossbar.

Romero’s save could prove to be the decisive factor this evening, should the Red Devils make it all the way to Wembley for the final of the cup, Romero will go down as an FA Cup hero.

#ARSMNU for all the credit we give De Gea, this is an excellent stop from Romero. pic.twitter.com/5M9hmES8CO

Check out some reaction to Romero’s stunning save:

Romero channeling his inner De Gea. What a save! #ARSMUN

What a save from Romero!

Sergio Romero is better than most 1st choice goalkeepers

Romero unleashing his inner de gea with that save. ??

What a world class save from Romero

Not sure if Romero or David De Gea ? pic.twitter.com/ersmoLBbkY

This fan had to take the chance to aim a slight dig towards rivals Liverpool: