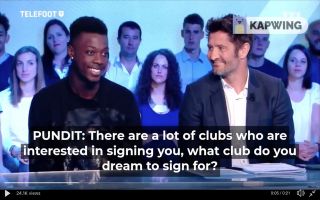 An old video that has resurfaced online shows that Chelsea could be set to beat rivals Arsenal to the signing of Lille’s standout star, Nicolas Pepe.

According to The Sun, a host of Europe’s elite clubs are in the battle for the Ivorian’s signing. Chelsea, as well long-time admirers Arsenal are in the race for the forward’s signature.

The report also highlights that Tottenham are interested in Pepe and that the attacker is on Barcelona’s seven-man shortlist to replace Luis Suarez.

There’s no doubt that that a big club will come calling to Lille for Pepe’s services in the summer if his form is even half as good as it has been.

The Ivorian has been of the standout stars across Europe this season, Pepe has contributed a goal per game in Ligue 1 this season. The 23-year-old has 15 goals and 7 assists to his name from 22 games, with 16 games left to play the ace’s stats for the season could be jaw-dropping.

A video from April 2017 has gathered some traction on social media in the last day or so, it shows Pepe when he was a guest on French television channel TeleFoot.

At the time the then 21-year-old was playing for Angers and he was questioned about the possibility of moving to the Premier League, here’s what he had to say about a ‘dream’ move to Chelsea:

Back in April 2017, Nicolas Pépé (currently Lille player, at that time Angers player), expressed his 'dreams' of signing for Chelsea one day..

Saying 'it's the only club in England that I would sign for' ?? @NicolasPepe19 pic.twitter.com/LShpWwYtri

Chelsea fans may have lost patience with Willian but if they sit tight Nicolas Pepe could be another right-wing option for them in the summer, the Blues’ squad will already be bolstered once Christian Pulisic joins.

The likes of Pepe, Pulisic and Hazard could work behind Gonzalo Higuain next season- should his initial six-month stay in West London turn out to be successful.

Maurizio Sarri will find it hard to accommodate all these attackers next season.

Check out some fan reaction to the revelation:

Nicolas Pepe would bang for Chelsea. Apparently he is a blue aswell?

Nicolas Pepe. Get him in @ChelseaFC he is one of our own. ? https://t.co/wveLOxMcG2

Do you think Pepe will be heading to Stamford Bridge?