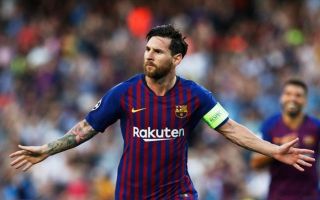 After sitting out the midweek defeat to Sevilla in the Copa del Rey, Lionel Messi is back in the Barcelona squad for the clash with Girona this weekend.

The Catalan giants have it all to do in the second leg of their quarter-final cup clash on Wednesday, but first they will look to get back to winning ways.

Messi was rested last time out and wasn’t even included in the match-day squad, but coach Ernesto Valverde is taking no such chances this time round as the Barcelona legend is back in the fold.

A win would potentially ensure that the current La Liga leaders stay top of the pile with a five-point lead over nearest rivals Atletico Madrid, and so they can ill-afford to drop any points and give their title rivals a chance to close the gap.

In turn, it’s a strong squad with all the usual suspects getting a call up, but as seen in the responses below, many fans were left disappointed that Ousmane Dembele won’t feature.

As noted by Goal.com, that’s because he picked up an ankle injury against Leganes in the last league game, and so he’ll play no part as he isn’t expected back for at least another week. With that in mind, his presence will evidently be missed by many.

Despite his absence though, Barcelona can still call upon Messi, Luis Suarez, Philippe Coutinho, Kevin-Prince Boateng and Malcom in the final third, and they’ll hope that’s more than enough to ensure that they get the desired result before heading into that crunch second leg clash with Sevilla.

NO DEMBELE NO PARTY