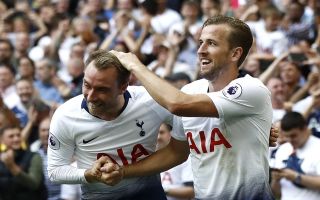 Real Madrid are reportedly set to end their interest in Christian Eriksen, which will be music to the ears of all concerned at Tottenham.

The 26-year-old creative ace has been hugely influential for Spurs since joining the club from Ajax in 2013, bagging 45 goals and 60 assists in 191 Premier League outings.

As he continues to play a fundamental role for Mauricio Pochettino’s side, the last thing that Tottenham will want is to lose him any time soon.

That has been the overlying threat in recent times, with Real Madrid heavily linked with a swoop. However, as noted by AS, the Spanish giants are said to be set to drop their interest in the Danish international.

It’s added that Spurs chairman Daniel Levy was set to demand €250m for Eriksen, while the financial aspect of the deal does seem to be the main factor as to why a move won’t materialise, as it’s noted that Real Madrid expect his price-tag to be much higher than they deem realistic.

That’s not the first time that €250m valuation has been mentioned, with Marca suggesting that was the price involved last year too.

Nevertheless, there is still one key reason as to why Spurs will remain nervous over an exit, as Eriksen’s current contract only runs until 2020. With that in mind, they will surely not want to go into the last year of his deal with uncertainty over his future, and Tottenham fans will undoubtedly hope that a new agreement is reached well in advance of that.

Time will tell if it’s that simple, but based on the statistics above and Eriksen’s overall influence on Tottenham’s style of play, he is a player that they can’t afford to lose if they wish to continue to scrap for top-four finishes in the Premier League and kick on in their pursuit of trophies.