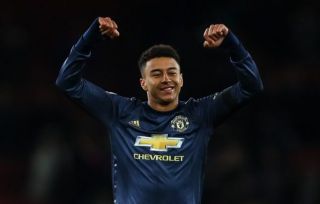 Jesse Lingard is making a habit of enjoying his trips to the Emirates, as he helped Man Utd to a 3-1 win over Arsenal in their FA Cup clash on Friday night.

The 26-year-old found the back of the net with a well-taken goal just before half-time to double United’s lead, as they went on to make it eight consecutive victories under Ole Gunnar Solskjaer.

SEE MORE: Video: Anthony Martial scores to make it 3-1 to Manchester United after some great play from Paul Pogba

However, the England international clearly enjoyed himself and his goal as he proceeded to moonwalk during his celebration, as seen in the video below.

It’s nothing new for him as he has history of displaying his best dance moves in north London, as seen below when he last found the net against the Gunners in their Premier League clash last season.

Some eagle-eyed Man Utd supporters have now noticed he’s trolled Arsenal on Instagram, as having posted an image of himself on the social media platform, he tagged the location as ‘Dancefloor’, as he clearly enjoys bringing out his best moves at the home of United’s fierce rivals.

It won’t go down well with Arsenal fans who were visibly infuriated with him during the game as things also became heated late on after a spat between Sead Kolasinac and Marcus Rashford, but that probably won’t bother Lingard too much based on his post below as he seems to relish going back to the Emirates.

Jesse Lingard just uploaded this photo on Instagram and tagged the location as ‘Dancefloor’.

Lingard ending Arsenal at the Emirates and Milly Rocking at their own ground will never get old. ? pic.twitter.com/jzB7NTitHY