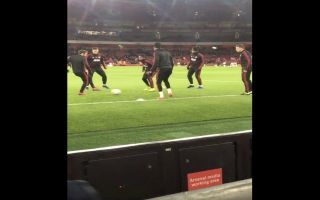 During Manchester United’s pre-match warm-up before facing Arsenal in the FA Cup, Marcus Rashford produced a moment of exceptional skill.

The Red Devils booked their place in the fifth round with a 3-1 victory at the Emirates Stadium on Friday evening, thanks to goals from Alexis Sanchez, Jesse Lingard and Anthony Martial.

The United players were clearly in high spirits as they prepared on the pitch pre-match, coming into the contest off the back of seven consecutive wins.

Rashford has been one of the team’s bright spark’s in recent weeks and although he was dropped to the bench for this particular clash, he was still showing off his impressive footwork in training beforehand.

During a passing drill, Rashford stopped the ball in front of Fred, who was attempting to win it back in the middle of a circle, before sensationally nutmegging the Brazilian with an outrageous swish and flick of his right foot.

The rest of the squad reacted in pure disbelief, while Fred could only laugh and admire his teammate’s audacity.