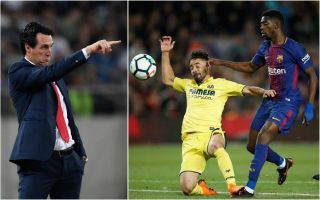 Arsenal are reportedly holding internal talks over splashing out close to £80million on Malcom and Pablo Fornals before the end of the transfer deadline.

The Gunners look in urgent need of strengthening in the attacking midfield department as Ramsey is set for a transfer to Juventus, while Mesut Ozil has fallen out of favour with Unai Emery.

According to Sport, £50m Barcelona winger Malcom is one of the club’s priorities in the final days of the transfer window, while Inter Milan wide-man Ivan Perisic has also been linked with the north London giants.

And having missed out on Barca ace Denis Suarez, the report also states Villarreal midfielder Fornals is another option for the club.

The Spaniard has been in superb form this season and has a release clause of just over £28m, which could make him a real bargain if he fulfils his potential.

Arsenal fans will be desperate to see these deals go through after a recent slump in form that has seen Emery’s side thrashed by both Liverpool and Manchester United.