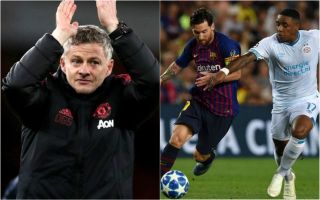 Manchester United have reportedly initiated contact with PSV over the potential transfer of Steven Bergwijn.

According to the Daily Mirror, the Red Devils have asked the Dutch giants to be kept informed about the young winger’s situation as Liverpool and Bayern Munich are also linked with an interest in him.

Bergwijn looks a hugely exciting prospect after his recent rise in the Eredivisie, and it would be little surprise to see him make a move to a bigger club before too long.

Especially with a relatively low asking price of just £25million quoted by the Mirror, which could end up being an absolute steal in this market.

United are in great form at the moment but could probably still do with more options in attack due to the inconsistency of Alexis Sanchez since he joined from Arsenal last January.

Liverpool, meanwhile, could surely also benefit from adding Bergwijn to their squad due to a lack of real depth behind their first choice front three of Mohamed Salah, Sadio Mane and Roberto Firmino.