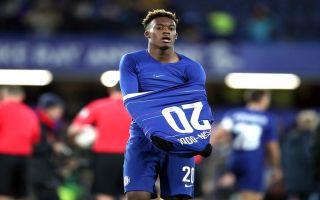 Chelsea fans were heard pleading with Callum Hudson-Odoi to stay with the Blues, the youngster didn’t deny that he would be leaving in the January transfer window.

The teenage sensation was in fine form for the Blues against Sheffield Wednesday this evening, the youngster even managed to get on the scoresheet in the 64th minute of the encounter when he showcased a brilliant touch and a lovely piece of skill to fashion himself a chance to score. Check the goal out here.

According to The Telegraph, the youngster handed in a transfer request to the Chelsea hierarchy and the MailOnline reported that Bayern Munich are ready to return with a bid of £40m for the winger’s services before the transfer window closes.

The 18-year-old was interviewed by the BBC after the game and when he was asked if this was his last game in a Chelsea, he responded with:

“I don’t know. I can’t say. But you know I just keep working hard and you never know what happens.”.

The teenager remained coy when he was asked if he’d been in contact with Bayern Munich:

Here’s what Hudson-Odoi had to say when questioned about rumours of a move to Bayern Munich:

Has Callum Hudson-Odoi played his final game in a Chelsea shirt?@_manishbhasin puts that question to him… #FACup #bbcfacup pic.twitter.com/ejtzSTUb09

After the post-match interview, Chelsea fans were left disheartened at the fact that they were close to losing such a talented young player, so they stayed around and chanted this to Hudson-Odoi:

Some Chelsea fans stayed behind to yell "stay with us" to Callum Hudson-Odoi after his TV interview. #CFC #CHESWE

Chelsea would be losing arguably the best player to come out of their academy in years but it seems that the club have left things too late with the youngster as he may already have his heart set on a move to Germany.