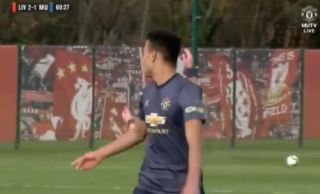 If you haven’t already heard the name Mason Greenwood, then you may well want to, well, remember the name.

The Manchester United wonderkid looks like one of the most exciting youth players in the country at the moment, and just helped the Red Devils turn a 2-0 deficit against Liverpool into a 3-2 win almost single-handedly.

Watch these highlights of the youngster below as he scored two free-kicks and had a hand in another goal as this young United side got one over their old rivals at youth level.

Unsurprisingly, it’s being met with a lot of calls for Greenwood to get into the United first-team!

No need to sign a right winger in the summer. Promote greenwood and tahith chong from the youth team to the first team

Greenwood is looking a fantastic talent. I hope he gets some first team action soon! https://t.co/PPvOHMqRGJ

We need to embed Mason Greenwood into that first team. Kids cold

It’s time to Promote Greenwood to the first team @ManUtd