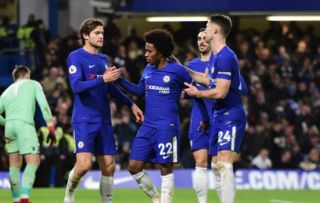 Chelsea fans flocked to Twitter this evening to express their delight at seeing Marcos Alonso claim a starting place in the Blues’ team to face Sheffield Wednesday in the FA Cup.

The west London side are to take on the Championship outfit at Stamford Bridge this evening, with the winner set to claim a place in the fifth round of the competition.

The home side have named a relatively strong side to take on Wednesday, with the likes of Gonzalo Higuain, Willian and Mateo Kovacic being elected to start the tie by manager Maurizio Sarri.

However, it wasn’t any of these star’s inclusion in the Blues’ starting XI, but that of Marcos Alonso, that had fans showing their delight on Twitter.

Some fans seem to think that by starting this match, it means the Spaniard won’t be selected for many Premier League games from here on out, with supporters predicting Emerson Palmieri being the one to replace the 28-year-old.

We can see why these fans have this idea, as we can’t see why the club would start Alonso in a less meaningful match like today’s when they have a Premier League game vs Bournemouth in midweek.

We’ve picked out a few tweets from fans showing their delight at seeing Alonso start this evening.

And given their reasoning, we can sort of see why!

Never been so happy about Alonso starting a game

ALONSO IN THE CUP SO PLEASEEEEE EMERSON IN THE LEAGUE

Pipaa and Alonso start which means Emerson is starting in mid week ?? https://t.co/dzQxkUmHkV

Alonso starts means Emerson will be our main starter now.

Alonso starting today ,. Meaning Emerson's position in PL is now secured ??
For Willian amnt sure.., this guy brings Sarri some Cigg at training ?

Does Alonso starting mean that Emerson will start the league game in the midweek, if so I'm exited @Blue_Footy @ojharbord

MAN SAID ALONSO PLAYING TODAY SO EMERSON IN THE LEAGUE!???????

Alonso in the start means Emerson for Bournemouth pic.twitter.com/YuFATntucv