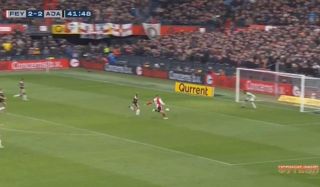 The Dutchman is lighting up this big Eredivisie fixture, showing the finishing that made him one of the finest to play in the Premier League.

Unfortunately, we won’t be seeing much more of this from the 35-year-old, who announced in October that he would retire from playing at the end of this season.

For now, though, enjoy this finishing masterclass from RVP!