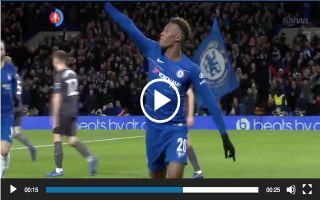 Callum Hudson-Odoi clearly isn’t fazed by the speculation surrounding his future, the youngster pulled off a lovely piece of skill before scoring for Chelsea this evening.

In the 63rd minute of this evening’s clash, teenage sensation Callum Hudson-Odoi showed that he’s worth the figures that are being peddled around for his signature by scoring a lovely goal.

According to The Telegraph, the youngster handed in a transfer request to the Chelsea hierarchy. It’s understood that he is keen on a move to Bayern Munich, the report states that the Bavarians have made the teenager several promises – including being able to don the No.10 shirt.

Hudson-Odoi expertly brought down Andreas Christensen’s inch-perfect long pass before using his trickery to fool the Sheffield Wednesday defender and get a shot off at goal.

Hudson-Odoi will be the name on everyone’s lips in the upcoming week, according to the MailOnline Bayern are ready to return with a bid of £40m for the winger’s services before the transfer window closes.

It looks as though the 18-year-old has his heart set on a move to Germany, he even turned down a whopping £80,000 a week deal to stay at Chelsea.

Could this be the youngster’s last goal for Chelsea?