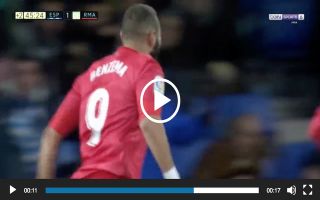 Karim Benzema’s second goal for Real Madrid this evening was a lovely strike, the Frenchman has been Los Blancos’ main man this season, scoring 15 goals this season.

During stoppage time in the first half, the talisman picked up the ball on the left wing before passing the ball to Vinicius Junior, the talented young Brazilian teed up the ball perfectly for Benzema and he curled in a wonderful shot into the bottom corner.

Benzema is often criticised but whilst Gareth Bale continues to struggle with injuries, he’s managed to get the job done for Santiago Solari’s side.

He showed off his poacher’s instinct when he opened the scoring for Madrid just three minutes in after tapping in the rebound to Luka Modric’s shot.

These fans were impressed with the impact that Benzema’s had this season:

Give my man Karim Benzema all the praise for standing up in post Ronaldo era for Real Madrid.

15 goals , 6 assists & 40 chances created already. Mind you , this is without being primary penalty taker. Otherwise he’d be at 22 goals already.

Benzema understands Vinicius more than anyone else in this team, and vice versa. Loving the link up to the fullest, need a Vinicius goal in the second half or Benzema to complete his hattrick.

Benzema in pretty special form at the moment.

The strike was Benzema’s 300th goal of his career:

To add to the above feat, Benzema has also become Madrid’s 6th highest scorer in their history, with 207 goals:

Real Madrid will move into 3rd place if they can hold to their 3-1 lead over Espanyol. Santiago Solari has managed to turn round what was a disastrous start to the season under ex-Spain boss Julen Lopetegui.