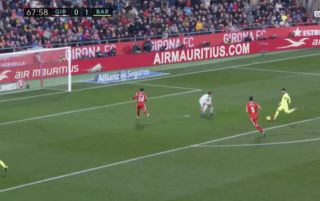 Lionel Messi scored a fabulous lobbed finish for Barcelona this evening to hand the Blaugana a 2-0 lead against Girona in La Liga.

Having already been 1-0 up thanks to an early goal from Nelson Semedo in the first half, Messi then struck halfway through the second period to double the away side’s lead.

The goal came after Jordi Alba was played in down the left, with the Spaniard’s pass finding a wide-open Messi in the middle, as the Argentine chipped the ‘keeper brilliantly to score yet again in the league.

The goal can be seen below. Great composure from the Barcelona talisman!