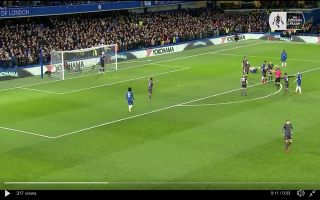 There was drama in the opening half an hour of Chelsea’s FA Cup Fourth Round clash against Sheffield Wednesday, VAR was used to review two penalty appeals in two minutes.

At Chelsea’s end of the pitch, Ethan Ampadu’s last-ditch challenge earned a whistle from the referee and for a moment it looked as though the Blues were about to be on the wrong end of a bad decision.

VAR was used to review the incident and it was correctly overturned.

Chelsea then won themselves a golden opportunity to take the lead when Cesar Azpilicueta was hacked down inside the Wednesday box, Willian confidently stepped up and sent the keeper the wrong way with a lovely penalty.

Check out a video below:

? | Willian coolly converts from the spot to grab his 50th @ChelseaFC goal! pic.twitter.com/gAKJrgU1ko

The Blues are still in the running to win all of their cup competitions this season, Sarri’s men have the momentum of defeating Tottenham in the League Cup semi-final heading into this tie.