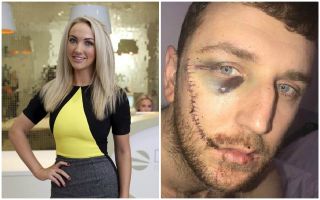 An Everton fan slashed across his face during ugly scenes with Millwall fans at the weekend has been offered free surgery to help heal his wound.

While of course it’s never nice to see such unsavoury scenes and injuries sustained as a result, Apprentice winner Leah Totton has received a backlash after taking to Twitter to offer free treatment to the fan in question.

SEE MORE: (Photo) Everton fan slashed across the face before Millwall clash, both sets of fans involved in skirmish

As seen in the responses below, it hasn’t gone down particularly well with most, as they’ve pointed to the fact that she should perhaps be offering free treatment to others more in need in more innocent circumstances.

Now it’s not entirely clear that the fan was prominently involved in the ugly clashes at the weekend, with some supporting Totton’s idea and to be fair to her, it is a nice gesture. Regardless, the responses below would suggest that the Apprentice winner may well start to regret her offer, along with her PR team, as her resources could be better spent elsewhere.

Based on his interview with the Sun, he hasn’t done a great deal to distance himself from being involved in the violent clashes.

Gosh this poor man, how awful to do that to someone’s face! If anyone knows this chap, please tell him to get in touch with Dr Leah Clinics once his stitches are out- we would like to offer him treatment for the scar to minimise it as much as possible, free of charge. https://t.co/FvfPBIa9Mq

So your going to treat a football hooligan for free?

How about you treat victims of crime! He was there to fight!! A football hooligan. There’s many innocent victims out there who are scarred for life through no fault of their own!

I’m sure there are children who have been involved in accidents who would be much more worthy of your PR stunt.

He knew what he was getting involved in… how bout giving free treatment to a little kid with facial wounds that was no fault of their own ay?

Who does your PR? They should be ‘fired’.

This ‘poor man’ is a football hooligan…. no sympathy !

This wasn’t some poor bystander who was attacked randomly, he was at the front of a group of Everton fans who went looking for a fight, no one deserves what happened to him, but if he wasn’t there he wouldn’t have got cut

WTF Dr Leah take a look at the footage, he went for a fight, why don’t you try giving free of charge treatment to people that did not go looking for trouble and are in serious need of treatment.?????#Stupidtweetoftheyear

He went to fight ! He was in the middle of it ! More people out there that need our medical help , sorry I don’t agree with you on this one . @DailyMirror