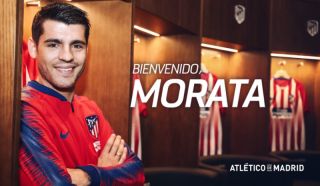 Alvaro Morata has been officially announced as a new Atletico Madrid player after a loan transfer from Chelsea.

The La Liga giants have finally announced the deal after plenty of speculation involving the Spain international, who had struggled in his time at Stamford Bridge.

Morata previously shone in his native Spain with Atletico’s rivals Real Madrid, but could not take that kind of form with him to England.

One imagines the 26-year-old’s Chelsea career is now basically over, and he’ll be hoping he can get back to his best under Diego Simeone.

Atletico now have an exciting attacking line up as Morata joins the likes of Antoine Griezmann and Diego Costa in the squad.

Quoted on Atletico’s official site, Morata explained that he was proud to have made this move and looking forward to playing with his new team-mates.

‘I feel very happy, I am very happy and very proud to be here, I can not wait to train, be with my teammates and to play,’ he said.

In truth, Chelsea fans will probably be as happy as he is to see their relationship come to an end, with Gonzalo Higuain joining the club this January and looking a major upgrade up front.