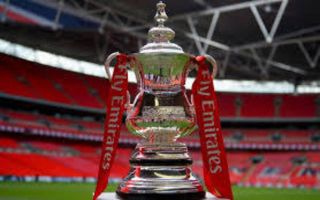 The FA Cup fifth round draw has been made, with Chelsea facing Manchester United at Stamford Bridge in a replay of last season’s final.

Manchester City are the only other big Premier League club still in the competition, with the likes of Arsenal, Liverpool, Tottenham, West Ham and Everton all already dumped out.

That means the winner of the Chelsea-United clash will be in with a huge chance of going all the way in this season’s FA Cup, with City their most likely rival for the trophy.

Pep Guardiola’s side must ensure they’re not the victims of an upset, however, with the reigning Premier League champions drawn away to either Middlesbrough or Newport.

And after beating West Ham and Everton, respectively, AFC Wimbledon and Millwall now meet in the next round in what should be another intriguing clash.

Crystal Palace, Wolves and Watford are among other top flight sides still in the cup, while Brighton could also be in it if they win their replay against West Brom.