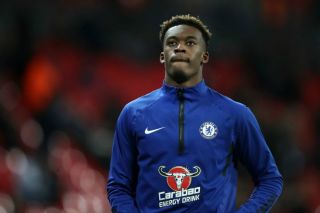 Amid ongoing speculation over his future, Gianfranco Zola has issued a no-nonsense assessment of Chelsea’s stance on Callum Hudson-Odoi.

As reported by BBC Sport, it has been suggested that the 18-year-old has even handed in a transfer request amid talk of a new £35m bid from Bayern Munich.

That undoubtedly raises serious doubts over his future at Stamford Bridge, but that didn’t stop Maurizio Sarri from selecting the teenager in the win over Sheffield Wednesday in the FA Cup on Sunday evening.

Hudson-Odoi went on to score in the 3-0 victory, making it two goals and three assists in 11 games for the senior side so far this season.

It’s clear that Chelsea have got a real talent on their hands, and judging from Zola’s post-match comments, it’s also very clear that they hope to convince him to stay with them.

“We want him to stay as well, we were singing for him to stay,” Zola said, as quoted by ESPN. “I don’t know [what will happen but] we want him to stay. He has a contract, we are training. We believe in what he can do for this team.

“I don’t think there are many 18-year-old players around Europe that are are playing as much as him in a big team. That shows that we believe in him, we think he can be an important player for us, so we will see what happens.”

Time will tell if that happens, but Zola does make a valid point. Hudson-Odoi is getting playing time at senior level very early in his career, and can build on that.

While he would perhaps land a more prominent role with the Bavarian giants, and coupled with Jadon Sancho’s impressive season with Borussia Dortmund, it’s easy to see the appeal of moving to Germany.

Nevertheless, it’s a crucial decision for his future, as it appears as though he can establish himself at Chelsea if he continues his good form and so time will tell if he’s willing to be patient.