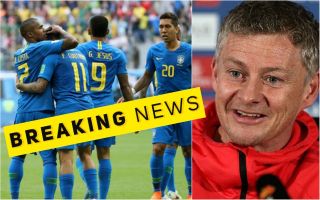 Barcelona have reportedly been contacting clubs about offloading Philippe Coutinho – and it’s suggested Manchester United are ready to pay around £70million for a transfer.

The Red Devils have perhaps been the club most strongly linked with the Brazil international in recent weeks, though Chelsea, Liverpool and Manchester City have also been talked up as possible contenders.

It hasn’t worked out for Coutinho at the Nou Camp and the latest from Don Balon is that Barca are trying to offload him, though they’re struggling to find a club ready to pay his asking price.

While it seems Man Utd, Chelsea and co. could cough up around £70m for the 26-year-old, Barcelona would like something a lot closer to what they paid for him just a year ago – around £140m.

That seems unlikely now as Coutinho’s form has dipped so considerably, so it remains to be seen if the Catalan giants can lower their demands in a bid to get the player off their books.

United could do with a quality attacking player like Coutinho at Old Trafford after the struggles of Alexis Sanchez since his move from Arsenal last winter.

MUFC have spent big on many of the world’s best players in recent times, and Coutinho would be another exciting big-name addition to this squad.

It was recently suggested that United could pay closer to £120m for Coutinho, but it seems those initial reports may have been a little optimistic.