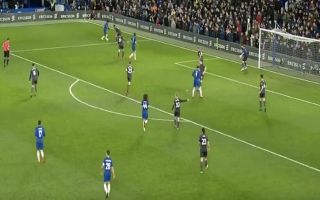 Chelsea midfielder Willian produced an outrageous moment of skill during the team’s 3-0 victory against Sheffield Wednesday on Sunday.

The Brazilian grabbed a superb brace either side of a Callum Hudson-Odoi strike to help the Blues secure their spot in the fifth round of the FA Cup.

Willian’s first goal came via the penalty spot, but his second was a real sight to behold, as he played a neat one-two on the edge of the box with substitute Olivier Giroud before curling the ball into the far corner of the net.

The 30-year-old capped a fine display when he managed to execute the perfect ‘flip-flap’ during the second half, beating his man all ends up on the left-hand side before whipping in a cross.

It was a brilliant piece of skill which had the crowd on their feet, as Willian showed once again he is capable of delivering the goods when he is in the mood.

Check out a clip of the moment below, via Twitter.