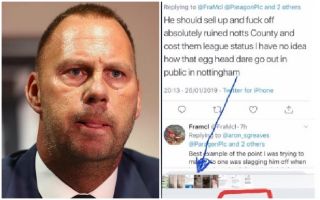 Notts County owner Alan Hardy has put the club up for sale but has gained unwanted attention by sparking a controversial storm after accidentally tweeting an inappropriate image.

As noted by the Guardian, the decision has been taken due to Hardy’s desire to concentrate on his other businesses, and not because of this incident or the club’s struggles on the pitch.

SEE MORE: Man Utd stars APOLOGISE to couple on train who have NO IDEA who they are

However, as seen in the tweet below, he has hit the headlines this week after accidentally posting an x-rated photo on Twitter, which he quickly deleted but not before it was noticed, as per BBC Sport.

“I’m absolutely devastated and mortified by what’s happened,” Hardy told BBC East Midlands Today. “I’ve apologised to my family, friends and work colleagues. Clearly it was an accident and I’m devastated by it.”

It’s added by Sky Sports that the FA are now looking into the matter and will speak with Hardy to get a clearer picture of how it unfolded.

It seems as though it was an innocent mistake and one that Hardy tried to resolve immediately, but coupled with his attempts to now sell Notts County, his name has made plenty of headlines and clearly not for the right reasons.