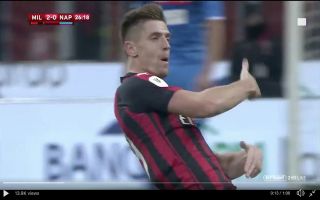 AC Milan new-boy Krzysztof Piatek is having an absolute stormer for Gennaro Gattuso’s men in their Coppa Italia Quarter-final clash against Napoli this evening.

The 23-year-old has been one of the standout performers across Europe this season and it wasn’t surprising to see Milan come in for the Polish star during this transfer window. The talisman joined the Rossoneri for a fee of £31m on a four-and-a-half year deal, according to Sky Sports.

Piatek opened his account for Milan in the 10th minute of the Coppa Italia clash, the Pole showed expert composure to slide the ball into the back of the net after an inch-perfect long ball was played to him.

In the 27th minute of the tie, Piatek scored once again. The former Genoa star scored an exquisite goal, after cutting in from the left Piatek curled one into the top corner. The goalkeeper had absolutely no chance of saving this one.

That's how you introduce yourself to the home fans!

Krzysztof Pi?tek grabs his second goal with a stunning finish!

Piatek could be the striker that Milan have been crying out for.