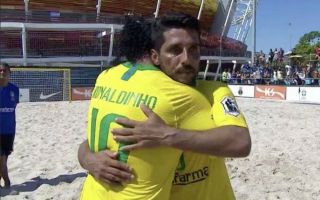 Former Brazil and Barcelona superstar Ronaldinho took to the sand in Japan this weekend in testimonial matches to honour the retiring Jorginho.

Ronaldinho was the star attraction as beach soccer star Jorginho marked the end of his career on the sand, during two games for the Brazil national team against Japan in the far east, which saw the Samba stars win by a final scoreline of 11-4.

Ronaldinho retired from professional football in January 2018, after a stellar career during which he won the Champions League, World Cup, La Liga and Serie A.

The ex-Ballon d’Or winner showed that he hasn’t lost any of his outrageous samba skills in retirement, however, as he ran the show for Brazil on the sand, scoring three brilliant goals and providing numerous assists for teammates.

Check out a couple of clips of him in action this past weekend below, via Twitter.

A serial competitor at the #BeachSoccerWC, the Brazilian played his last game on sand in a friendly against Japan, with @10Ronaldinho by his side ???pic.twitter.com/g6t6lMZBkz

“We were totally surprised” – Ronaldinho attempts to explain passport confusion that landed him in prison April 27, 2020 15:11
Paris Saint-Germain

Photos: Luxury hotel that Ronaldinho is under house arrest in after prison release April 11, 2020 16:15
Paris Saint-Germain