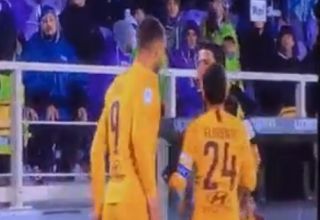 Roma striker Edin Dzeko got himself sent off against Fiorentina as the Serie A side suffered a heavy 7-1 defeat tonight.

The former Manchester City star clearly lost his head in this moment of madness, spitting in the referee’s face from close range before unsurprisingly being shown a straight red card.

Dzeko is usually a top performer for Roma and a source of goals up front, but this was not one of his finest moments.

Watch the bizarre incident in this short video clip below:

Despicable behavior by Edin #Dzeko.
He should be banned for 5-10 matches but given that it was #CoppaItalia match & not #SerieA he could still find himself playing in the league.pic.twitter.com/DRzKylqf0n