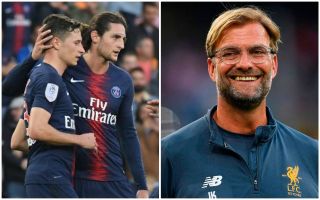 The talented young France international, valued at around £45million by Transfermarkt, should now make his way to Anfield in the summer on a free.

Rabiot has been stalling on a new contract at PSG, attracting interest from top clubs like Chelsea and Man Utd lately, though it seems he’s agreed to join Liverpool instead, according to Don Balon.

Talks this week seem to have sealed the deal for the Reds, who will be thrilled to add such a quality player with his best years ahead of him to their squad.

Rabiot could be an upgrade on players like Jordan Henderson and James Milner, whilst also providing another option after Naby Keita’s slow start to life on Merseyside.

Adrien Rabiot looks set for a transfer to Liverpool over Chelsea, Man Utd or Barcelona

This follows recent claims by Paris United that Liverpool were the 23-year-old’s preferred destination, as he seemingly has a long-standing affection for the club.

Rabiot had also been linked with a low-cost move to Chelsea this January, while there was also talk of a battle between Manchester United and Barcelona for his signature.