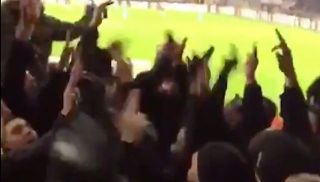 Krzysztof Piatek made himself an instant hero with the AC Milan fans after bagging a brace on his full debut in the Coppa Italia clash with Napoli on Tuesday night.

The 23-year-old joined from Genoa last week in a deal worth €35m plus bonuses, as per the Guardian, and came off the bench for his first appearance for the Rossoneri at the weekend in the league meeting with Napoli.

However, he was handed a starting berth by coach Gennaro Gattuso in midweek, and he didn’t disappoint as he scored a quick-fire brace in the first half to help seal Milan’s progress to the semi-finals.

Having been signed to essentially fill the void left behind by Gonzalo Higuain after his move to Chelsea, the Polish international wasted little time in offering an insight into what he can produce, but the true test will of course be maintaining it and showing consistency.

Nevertheless, it was more than enough for these Milan fans to get excited over, as they perhaps believe that they’ve finally got an out-and-out striker who can fire them to their objectives moving forward.

With that in mind, they’ve come up with arguably one of the catchiest chants for their new signing, as seen in the video below, which is doing the rounds in a big way on social media…